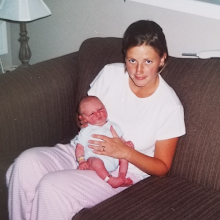 After a long labour, Markus joined our family as our fourth child on a warm Sunday morning in July. As he entered this world the doctor held up his umbilical cord, which had a tight pretzel knot in it, and exclaimed, “someone was watching over this little one!”  We knew Who was watching over Markus, and we knew that Someone would watch over him for the rest of his life.

Markus was a content child, happy to do whatever his siblings were doing, especially his big brother Micah. Micah and Markus were very close brothers and rarely argued or fought. When Micah went to William of Orange Christian School, Markus so badly wanted to go too.  He was very excited about starting kindergarten so he could join his siblings.  But this excitement only lasted until grade two. When school started that September, he absolutely refused to go, and ran home. I was shocked. I had never seen this behaviour from Markus.  The principal, Kent Dykstra, and I organized a system to get him to stay. I would hand him to Kent, kicking and screaming, and turn around and walk home. Kent would take him into the school and lock the door. It was only later that I learned the reason for Markus’ fear was that Micah had told Markus the grade two teacher, Mr. Leguijt, was scary. Regardless, this aversion to school stayed with Markus his whole childhood.

When Markus got to high school, one of his favorite subjects was woodworking.  He enjoyed working with wood, and he loved making stuff for other people. He was always excited to go up north to Houston where he could help his grandpa with one of his many wood projects that were on the go.  The pieces of wood art we have in our house made with Markus’ own hands will be a precious reminder of him for the rest of our lives.

Markus came across as quiet and calm, but two of his strongest character traits were his work ethic and his ability to take risks. This is the character that led Markus to always dream of starting his own business. His goal was to graduate from Credo Christian High School as a business owner. Even though he ran out of time to fully get his business going, he did it. The many reminders of On the Mark Maintenance will live on in our memory for years to come.

Markus would regularly come up with big ideas and I would always find cost-benefit analyses papers all over the house.  He also wasn’t afraid to talk to other businessmen for their ideas and opinions.  When Markus was 16, he met Gary Baars, a gentle soul who quickly became Markus’s mentor, fellow risk taker and big idea man. Markus loved being around Gary, and Gary loved having him around because Markus would be game to do anything. Whether it was chasing cows, building garden boxes for Gary’s wife Marie, cleaning trucks, pressure washing, delivering hay, bidding on cattle at the auction, babysitting and bottle feeding the many Baars’ foster kids, or brain storming business ventures, Markus loved hanging around the Baars farm and their family.

Markus also had a unique relationship with his Auntie Charis and Uncle John David, both of whom run their own businesses. He would spend hours with Charis talking shop, and he could convince his Uncle JD to purchase big items on Facebook marketplace simply because he thought “they might be a good deal.”

On a quiet spring Sunday afternoon, Markus went to be with Jesus. He was born on a Sunday and he died on a Sunday. Even though I know Markus is with Jesus, I will dearly miss him and as a mom it’s hard to let go. His whole family and all those he touched will miss him too, including his close buddies who carry him to his grave today.

Throughout Markus’ cancer journey he remained steadfast in his quiet confidence in his God.  Markus was never angry with God and God’s plan for him. Deeply sad, grieved to his core, but never angry. We as family pray that you too may be at peace with whatever God is doing in your lives, and that the hope of eternal life is real for you.